Post acne pigmentation or the scar which is left behind after the acne. They can present as a dark spot which can be a hyperpigmented spot, brown or red in color or they can present as Syst when the acne is deeper and heals with scarring. It is caused because of overproduction of melanin which is responsible for keeping skin its color.

Post-acne pigmentation is a scar that remains after acne. When the acne is deeper and heals with scarring, it can appear as cysts. They can also occur as a dark spot that can be a hyperpigmentation spot and be red, brown, or a combination of the two. It is brought on by an excess of melanin, the pigment that keeps skin color.

When dark patches appear after acne has healed, acne-related pigmentation occurs. Post-acne pigmentation is not harmful, but managing it can be challenging.

You are not alone if you have acne-related pigmentation. Get assistance from a proficient dermatologist or cosmetologist in Mumbai to know your treatment options.

She has several years of experience and expertise in dermatology and cosmetology. Thus, clients regard her as one of the best cosmetologist and dermatologist in Andheri, Mumbai.

Your condition’s severity, as well as the type and tone of your skin, will determine the specific course of action.

Find the best solution for your skin with the assistance of Dr. Anju Methil.

Continue reading to learn more about fading this type of pigmentation with the most suitable and effective skin treatment.

A potent antioxidant like vitamin C keeps your body healthy inside and out. It is also referred to as ascorbic acid or L-ascorbic acid.

By increasing collagen production, L-ascorbic acid can help lessen the visibility of scarring and improve skin tone. Vitamin C is thought to be safe for all skin tones.

Azelaic acid, which is well known for its anti-inflammatory properties, might be a good choice if you deal with both active acne and the ensuing hyperpigmentation. Raised brown spots might benefit from using this as well. However, hypopigmentation is a possibility if you have dark skin.

Kojic acid, which is derived from a particular fungus, is regarded as a natural bleaching agent. Since it is frequently used for age spots, it might function best for brown post-acne pigmentation.

Vitamin A is used to produce retinoids as a component. In the world of anti-aging skincare, some products are used for acne and the hyperpigmentation that results from it, even though they are regarded as tried-and-true treatments. These penetrate deep beneath the skin to even out skin tone and texture.

Alpha-hydroxy acid (AHA), also known as mandelic acid, is produced from almonds. It is often combined with other components to treat wrinkles and uneven skin tone as part of an anti-aging regimen. Inflammatory acne can also be treated with this acid.

It is a product formed from niacin (vitamin B-3). Due to its capacity to promote moisture retention, it is frequently present in wrinkle creams and other anti-aging products. Additionally, it may boost collagen synthesis.

A bleaching agent called hydroquinone removes dark spots while also delaying the release of melanin. This ingredient works best for removing darker spots on all skin tones, but if you have sensitive skin, you may want to avoid using it. 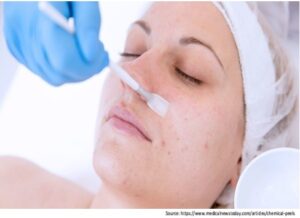 When applying a chemical peel, stronger concentrations of acids are used to treat the targeted skin area. By removing the epidermis, they minimize the appearance of hyperpigmentation.

To achieve more dramatic results, deeper versions may reach the dermis, the middle layer of your skin. They may also yield quicker results than face acid products and are most effective for fairer skin tones.

Targeted light beams are used during laser skin resurfacing procedures to lessen hyperpigmentation. Ablative and non-ablative lasers are available. The most intense laser treatments involve scraping away layers of your skin.

Although ablative lasers are more powerful, they could have more side effects. On the other hand, non-ablative procedures focus on the dermis to encourage collagen growth and tightening effects. Both eliminate particles from your skin, so new, tighter, more toned skin cells regenerate.

There isn’t a one-size-fits-all approach to skin resurfacing. For those with fair skin, ablative lasers might be more effective. Non-ablative versions may result in skin darkening rather than lightening for some people.

Dr. Anju Methil, our seasoned cosmetologist in Mumbai, will determine the best option for your skin after evaluating your skin condition and overall tone.

An in-office procedure called microdermabrasion is used to treat hyperpigmentation that only affects the epidermis (superficial scarring).

Your dermatologist may carry out the procedure with a portable drill-like tool with a wire brush or other abrasive attachments. Then, remove the epidermis swiftly but gently, swiping the device across your skin. To get the best results, you might need several sessions. It is most effective on those with fairer skin.

Dermabrasion removes a portion of your epidermis as well, but it also impacts your dermis. Your dermatologist may employ a drill-like handheld tool with a wire brush or other abrasive attachment, similar to that used in microdermabrasion. They will swiftly but delicately move the device across your skin to remove your entire epidermis and the top layer of your dermis.

If you want to reduce post-acne pigmentation more quickly than microdermabrasion, dermabrasion might be a good option. The results are best on lighter skin. It may cause more hyperpigmentation in people with medium skin tones. After about eight weeks, the hyperpigmented patches that have just appeared may lighten.

IPL treats general pigmentation problems, but flat spots respond particularly well to this therapy. Additionally, it might aid in lessening the visibility of wrinkles, spider veins, and enlarged pores. Skincare experts claim that those with fair skin benefit most from IPL.

Which treatment suits each skin tone the best?

If you easily tan or have darker skin, you may be prohibited from undergoing the following procedures:

The following choices may be helpful for people with medium skin tones:

Those with darker skin may benefit from:

In general, topical treatments take longer to show results. With any treatment, patience is essential.

If post-acne pigmentation concerns you, make an appointment at Skin & Shape Skin Clinic in Andheri to receive the best care for your skin type.